The ASUS Gaming TUF GA502DU-AL025T is just the right partner: Excellent performance , many features, built-in gaming keyboard with stylish lighting , powerful sound system , all housed in a flat and lightweight case. Equipped with extreme gaming power in the form of a modern AMD RYZEN 7 processor and an NVIDIA Pascal graphics card deliver the notebook's neat performance on the go.

Game Ready Performance
Imagine a compact gaming laptop that punches well above its weight — that’s what the new Zephyrus brings to the party. It’s powered by the latest AMD Ryzen processor, which has quad cores and eight threads capable of speeds of up to 3.7GHz. And it’s not just for gaming, Zephyrus GA502DU allows for faster, more efficient multitasking, including daily productivity tasks, surfing the net, and watching movies and videos, powered by 76Whr battery giving upto 6 hours battery life. Dominate games with Nvidia GeForce GTX 1660Ti Graphics which boasts significant performance boosts from previous generations, the GA502DUis up to the task, inside and outside the gaming arena.

Hyperfan
The system automatically adjusts fan speeds according to CPU and GPU temperatures. Switch between Turbo, Balanced, and Silent modes to suit the situation at hand. Turbo mode is the most aggressive setting, providing the highest fan speeds and frequencies to fully exploit the power of X505DY/FX705DY. Balanced mode optimizes performance and cooling to lower noise levels under 45dB for gaming, while Silent mode further curbs fan noise and is perfect for surfing the net, getting work done, or watching a movie. A default Windows profile with stock settings or a Manual mode let you quickly adjust fan speeds individually by a convenient keyboard shortcut.

I/O Ports within Easy Reach
GA502DU features a host of I/O ports including a single USB 2.0 and two USB 3.1 Gen 1 Type-A ports for your gaming peripherals, as well as HDMI 2.0 to connect to an external display. All ports are situated on the left side of the laptop so there's nothing to interfere with right-handed mousing. 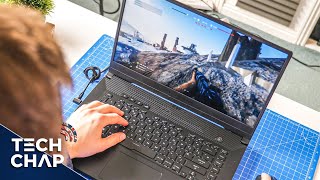