Intel's 7th generation processors bears the name "Kaby Lake" and when compared to its "Skylake" predecessor, is manufactured utilised an optimised manufacturing process. The 14 nm Plus process unlocks higher clock frequencies at lower voltages on Kaby Lake-series processors, in addition to a notable increase in efficiency. The consistency of the microarchitecture allowed the performance of the Kaby Lake series of CPUs to be pushed even further. The principal beneficiaries of this approach are the models with the "K" suffix, which offer impressive overclocking potential.

The Intel Core i7-7700K: Kaby Lake and its Advantages Compared to its Predecessors

The Intel Core i7-7700K comes with an unlocked multiplier, thereby allowing the processor to be overclocked. However even when running at stock frequencies the Intel Core i7-7700K offers a very high clock frequency of 4,2 GHz, which if necessary can be boosted to 4,5 GHz via GPU Boost 2.0. The Thermal Design Power (TDP) is 91 Watts, a level similar to that of Skylake. As a Core i7, this quad-core processor comes with Intel's Hyper Threading technology (HT) and is capable of carrying out not only four, but eight threads simultaneously.

Besides the increased clock frequencies and the reduced TDP in comparison to "Skylake", Kaby Lake processors also come with Speed Shift 2.0. Speed Shift was introduced with Skylake and is a feature that allows the CPU to have more control over the clock frequency. This allows processors to react more quickly to requests for additional performance and minimises delays as a consequence.

Kaby Lake also supports, depending on the motherboard, DDR3L memory. By and large it is preferable, however, to use faster and more efficient DDR4 memory - which now supports 2.400 MHz as standard. This edition also retains the LGA 1151 socket and Kaby Lake processors are compatible with chipsets from the 100- ("Sunrise Point") and 200- ("Union Point") series.

The biggest difference between the 200-series chipsets in comparison to the 100-series is the support for Intel's upcoming Optane Memory technology whose "XPoint" memory structure supports a data transfer rate up to ten times higher than NAND memory while enabling improved operational durability. Hard drives with Optane Technology, similar to the extremely fast NVMe-M.2 SSDs, are linked to the motherboard via PCIe slots.

The integrated graphics processing unit (iGPU) known as the Intel HD Graphics 630 (version GT2) offers more than enough graphical horsepower with its 24 Execution Units for Intel Quick Sync, GPU compute, and of course one or two games as well. Furthermore the GPU supports DirectX 12 along with Feature Level 12_0, OpenGL 4.4 and OpenCL 2.0, as well as 60 Hz 4K/UHD resolution playback over DisplayPort subject to the corresponding motherboard utilised.

Here we refer to the boxed version of the processor, a CPU cooler is not contained within the bundle. 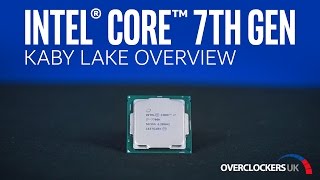 Amazing processor - it won't be the bottleneck in your system!

I have found that for overclocks 4.9ghz and above, the chip runs hot, even with voltages finely tuned.

The way the cpus own heat spreader it connected to the chip is very poor and so whatever cooling solution you have, it doesn't make a huge difference. Temps can spike and most mobos like to run fans at 100% once it reaches 75 degrees so I would recommend a 360mm AIO as a minimum.

I purchased this for my new build,
blazing fast chip with 4.5Ghz turbo.
overclocking is great i would suggest you get more efficient cooling than the previous gens (comeing from i7 3770k ivy bridge) this new chip runs much hotter.