Well-equipped B350 motherboard (Micro-ATX) from MSI, 1× PCIe 3.0 x16 / 1× PCIe 2.0 x16, 1× M.2 (PCIe 3.0 x4) & 4× SATA 6G, 8× USB 3.0 / 6× USB 2.0, max. 64 GB RAM at 2.666 MHz Motherboards with the AM4 socket serve as the platform for the AMD Ryzen (Summit Ridge) quad-core, hexa-core and octa-core CPUs as well as "Bristol Ridge" and "Raven Ridge" desktop APUs from the A-series with integrated GPUs unlike the old Athlon X4 which came without an iGPU. The advanced AMX X370, B350 and A320 chipsets are aimed at the enthusiast, mainstream and entry-level segments coming with an abundance of modern I/O interfaces and connectors for hardware peripherals, while additional data links are provided by the GPU/APU.

The Layout of the Micro-ATX MSI B350M Mortar

The MSI B350M Mortar is a Micro-ATX motherboard that comes with a lightning-fast PCI- Express 3.0 slot with a full x16 lanes. Furthermore there is a PCIe 2.0 slot with x4 lanes as well as two PCIe 2.0 x1 slots for additional expansion cards. Up to 64 GB DDR4-RAM can be installed into the four RAM slots, which in turn operate at a maximum of 2.666 Megahertz. range of internal connectors includes, among other things, two USB 3.0 headers and two USB 2.0 headers for a total of four ports respectively.

Data storage devices such as SSDs and hard drives are managed via four SATA 6G connectors (incl. RAID support) as well a horizontal M.2 slot, which is connected with four PCI-Express 3.0 lanes and therefore provides huge speeds of up to 32 Gbit/s. M.2-SSDs measuring from 42 mm to 110 mm in length can be used and furthermore the cutting-edge NVM-Express protocol is also supported. This protocol has been optimised to take advantage of the parallel processing utilised by modern PCIe SSDs.

A further highlight of the MSI B350M Mortar is to be found on the reverse of the motherboard, specifically the fact that the motherboard includes a USB 3.0 Type C connector. This new kind of USB Type C port is particularly thing and can finally be inserted in either direction. USB 3.0 or USB 3.1 Gen 1 can reach a maximum transfer rate of up to 5 Gbit/s per port.

Last but not least, four fans with 4-pin PWM connectors can be connected directly to the board. On the reverse of the motherboard is located the I/O shield which provides access to further devices and components via USB 3.0 and 2.0, Gigabit LAN, universal PS/2 or five audio jacks for connecting 7.1 sound to the MSI B350M Mortar. Furthermore the monitor outputs of the integrated APU-GPU (optional) include two monitor outputs: HDMI, DisplayPort and DVI-D. 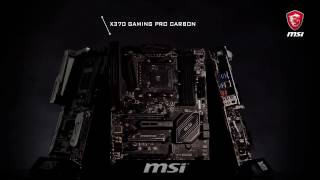