Get the best performance in the latest games like Mirrors Edge: Catalyst, Dark Souls 3 and Tom Clancy's The Division, with the latest NVIDIA GPUs. Use the awesome power of the GTX1070 to delve in to Virtual Reality with an Oculus Rift or HTC Vive VR headset and experience new levels of smoothness with the VR Ready GeForce GTX 10 Series, offering over double the performance of the GTX 900 Series in VR applications.
Using the latest Vulkan API and Direct X 12 along with other NVIDIA technologies including NVIDIA GameStream Technology and NVIDIA Ansel, the GTX 1070 is built to perform. The latest Pascal GPU architecture reaches new levels of power efficiency and silence, meaning you can stay fully immersed in your gaming and VR experiences.

NVIDIA’s GeForce® GTX 1070 is one of the most advanced gaming GPU ever created, powered by the high-performance, energy-efficient new NVIDIA Pascal™ architecture. Pascal enables truly game-changing performance with captivating sights and sounds, as well as next-generation VR performance that offers the lowest latency and plug-and-play compatibility with leading headsets.

NVIDIA GeForce 10 series is based on 16nm finfet architecture resulting in just 150W TDP (GPU) power consumption for a graphics card that can outperform Titan X in many situations whilst being upto three times more efficient. Overclocking headroom is also exceptional with around 1.8GHz core overclocks being possible (not guaranteed) resulting in 20% and higher overclock potential.

NVIDIA Simultaneous Multi-Projection Technology renders multi screens in one path mean performance in Virtual Reality titles on VR headsets such as HTC Vive and Oculus Rift results in double the performance of Titan X making 10 series the King of Virtual Reality and whilst being upto three times more efficient at the same time. 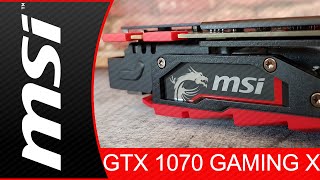 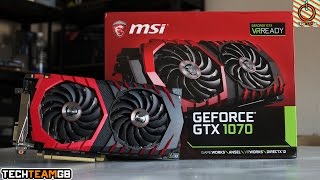 (from 17 customer reviews)
Write a review

It didn't come with the 8pin power cable that it needed so make sure you have this already if you don't want to wait for a few extra painful days like me :o)

MSI + Nvidia have done it again this GPU is excellent especially for the price.

CONS:
Only the MSI Dragon logo LED can change colour. The other LEDs are fixed Red & can only have preset animation cycles applied to them.
MSI Gaming App is slow, buggy & unreliable to install.

Overall this GPU is amazing considering the midrange price it powers almost every recent PC game @ 4K @ 30FPS minimum & many are closer to 45FPS @ 4K which is in itself an amazing achievement as the power draw is 100W less than the previous GTX970.

You do not need to spend anymore money on a fancier GTX1070 this GPU should last a good few years as its so powerful.

Going from a 4GB GTX 770 to this has been a pretty amazing process.

For those of you looking to really push the card, i suggest you have a look at the new GTA 5 Redux Mod.

Also, big up to overclockers, the card showed up the next day!

Took my time to buy this card in the hope they would come down in price. Sadly this wasn't the case but I just could not wait any longer. However this card is superb and runs like a dream. Everything runs super smooth at 1080p. Just saving up for an ASUS 165hz monitor so I can increase the resolution to make the card really shine! Should last me for at least 3 years this card. Runs super silent too. Also delivery was the fastest ever from overclockers. Ordered before midday and the card came the following day! Top marks!!

Bought for my new build in conjunction with DELL
S2716DG 27" 2560x1440 TN G-Sync 144Hz Gaming Widescreen LED Monitor and an i7 6600k, this card at stock absolutely eats up anything I've thrown at it so far. Doom on Ultra at 1440p runs comfortably at 100+fps - buttery smooth. Had good experiences with MSI and has good enough cooler to overclock when it starts to get pushed. While more expensive than ref designs, the better cooler and silent running make this the card to buy if you can stretch the budget.

I can finally play ARK Survival Evolved in epic settings. Could not be happier with the card. The design is superb as the card looks and feels premium. THE CARD IS HUGE. Best for medium to full towers. Lastly, if you're looking for the best bang for the buck GPU, look no further.

I've not had this card long but so far I can't fault it. It is tall at 145mm plus power cord cables 8+6pin so make sure your case had the width from motherboard to case side to accommodate it.

It's running very quietly, my case fans are louder. Boosts to just over 2000 out of the box with no overclocking. Runs BF4 at Ultra on a1440p 60Hz monitor perfectly.

Very impressed and can definitely recommend if you're after a GTX 1070. Also running on a P67 motherboard with a 2500k without issue.

I need a quiet rig so I place a premium on quiet components and this card delivers.

Performance is what you'd expect (same as any other 1070) but the MSI is fanless (so, silent) in desktop use. Even under heavy gaming load the fan noise is barely noticeable.

Card arrived yesterday got it installed with no hassles. Have been a console user since original xbox so

Quickly tried Rise of the Tomb Raider, Fallout 4 and Dying light all at max settings and it didn't flinch once.

Also made me realise my existing monitor is useless so now looking for a 1440" 144hz screen to compliment so beware of the extra expense! :)

Couldn't be happier and Overclockers.co.uk were a pleasure to deal with and will be looking to order monitor from them as soon as the funds allow!!

I was in desperate need of a GFX upgrade, as I was using a GTX 460!
It is such a pleasure to play games now on the highest video settings, I got a new system together recently, i5 6600k 16Gig ram, and the card was what I needed to finish my build.
Really happy with this card!

WARNING!!! The card is quite large, and quite tall. It fit in my case with very little room to spare, and as for the height I had to really bend the power connectors around to get the side back on. Just something to consider when buying. Also, for those who are interested, I'm using the Zalman Z11.

Now, onto the actual review.

I only put it in, so I have yet to get proper gaming experience. But, I have run both Firestrike and Unigine Heaven and I can say it more than makes a show of my old GTX 780.

I have this card running as standard straight out of the box, no manual overclocking, no MSI Gaming App overclocking, just what it shipped as. So far I'm quite impressed with it's performance and I look forward to seeing what it can do with a bit of an overclock.

Incredible card, Quiet, Powerful. What more can you ask for?! Runs everything I ask of it and appears to barely break a sweat. Half the time I will play a game and the fans won't even turn on because it hasn't hit the 60C threshold.

I upgraded from my MSI GTX770 2GB. Now able to play games on Ultra again. The card is incredibly quiet and on low load the fans stop completely making my PC far quieter at night. I'm not able to get the most out of the card due to my CPU bottlenecking a tiny bit of a few games such as ARK and Fallout (i5 4440, 12GB DDR3). Definitely worth a buy if you are looking to upgrade.

Oh and it has a backplate which is always good.

Price is a bit high in comparison to the competition but the MSI is a solid card and I believe a smidge more quiet than all other fan based cooling units. I have yet to break 60°C on anything I've run with a custom fan profile, but I do have excellent airflow in my case. I can't hear the card over the case fans even when they run high.

I chose this card because I wanted something fast, and quiet, and this card delivers on both fronts. I am happy with this card overall. It replaced an MSI GTX 970, and obviously is superior to it in every way.

Upgraded my MSI GTX 970 to the MSI GTX 1070 and wow, what a big difference in game play.
Bench marked this on Firestrike and on GTX 970 was getting just under 10,000 score. GTX 1070 gets nearly 15,000. A 50% increase.
Using Unigine Heavenbench mark i got the following results.
GTX 970 high settings FPS 116.5 scoring 2934.
Ultra settings FPS 103.9 scoring 2618
On GTX 1070 high settings FPS 195.2 scoring 4916
Ultra settings FPS 179.9 scoring 4531
Have played Tom Clancy`s the division and was getting on GTX 970 FPS average 60 but on GTX 1070 now getting average of 125.
This shows a big leap from the GTX 970 to the GTX 1070.
This was running stock and i have not even overclocked this card yet if at all need to.
I do recommend the upgrade if you have either a GTX 970 or 980 as the difference will be noticable.
Worth every penny even if more expensive than the 900 series cards.
If you are thinking of buying a GTX 980 Ti then as the price is near the same as the GTX 1070, it might be worth just edging towards the 1070 as it is just that little bit faster and powerful.
I will say, the MSI GTX 1070 is just as quiet as the GTX 970 was if not quieter and the card does great staying under 60 degrees. Even when it hits over 60 and the fan kicks in you cant hear it.
This card is very sturdy with the new back plate and the design has only changed a little but to me. for the better and it still runs a 6 and 8 pin power connector though power consumption is reduced.
A worthy build again from MSI and perfect for gaming.
Looking forward to testing out more on other games and possible overclock so will let you know results if i bench mark further.

Superb customer care and always ready to check things as needed. We are a very small business, yet they have always taken the time to make sur…
Copyright © 2019 OCUK Limited