When purchasing Oculus Rift and Oculus Touch together there are a total of 6 free games included:

Including Robo Recall, an action-packed VR First Person Shooter, the cheerful 3D platforming adventure Lucky's Tale, the immersive exclusive-to-VR trading card game Dragon Front, the VR drawing tool Quill, the multiplayer shooter Dead and Buried, the popular VR demo Toybox as well as the captivating VR experience that is Medium, which allows your to shape, model, paint and create your very own objects within VR. The games will be added to your games library directly after registering the devices.

Virtual Reality is the future of interactive entertainment and the future began back in 2012 with Oculus VR. With a surprisingly successful Kickstarter campaign, the young business sparked a renaissance in VR technology and raised 2,437 million US dollars for its development. That's almost 974 percent of the original goal they asked for to finance the project. Supported by famous game developers and a respectable amount of hype, the development made steady progress until Oculus VR was finally purchased by Facebook in 2014 - for a total of 2 billion US dollars. The result of this financially-savvy partnership is the market-ready Consumer Version 1 (CV1) of the Oculus Rift Virtual Reality headset.

The Features of the Oculus Rift VR Headset at a Glance:

The Features of the Oculus Touch Motion Controllers at a Glance:

VR pioneer Oculus gave the Rift HMD two OLED displays with a resolution of 1.080 x 1.200 pixels per eye to display a 110 degree wide field of view. The screen refresh rate of both displays is 90 Hz, and each picture renewal is completed globally as opposed to in individual scan-lines, as in the case of PC monitors. For the reduction of motion blur and judder, no single picture is shown for longer than two milliseconds. The distance between the two hybrid Fresnel lenses can be controlled by way of a dial on the underside of the headset, this allows the interpupillary distance to be adjusted according to the needs of the user. The distance from the lenses to the eyes themselves (the dioptric adjustment) can be calibrated via the use of optional replaceable face cushions called "Facial Interfaces". Visual refinements of the headset aside, the 3D audio system utilises HRTF Technology (Head-Related Transfer Function) and integrated headphones to allow surround sound that adapts to your location in real-time, taking your aural immersion to the next level. The headphones are also removable to allow people who prefer using their own headphones to output the sound directly from the PC.

A PC connected to the Oculus Rift must be able to deliver a consistent 90 frames per second, or one frame every 11,1 milliseconds. Delivering such high frame rates without glitches or dropped frames demands powerful PC hardware. With "Asynchronous Timewarp" the Oculus Rift offers a pro-active means of countering this problem. Should the graphics card be unable to supply a picture in time, Timewarp will warp the image rendered prior to sending it to the display. This allows the Oculus Rift to compensate for head motion that occurred after rendering the scene – thereby reducing perceived latency. This prevents gaps in the stream of frames from arising and renders temporary falls in frame rates almost undetectable. Furthermore this guarantees a fluid VR experience – a prerequisite for avoiding discomfort caused by motion sickness. Oculus implemented the next evolution of this technology in mid-November 2016. Known as "Asynchronous Spacewarp", it takes into account side-to-side head movements and changes in position by analysing two previous frames in order to compensate for missed frames. In the course of this the minimum system requirements were able to be reduced even further.

*only with Asynchronous Spacewarp

Attention: Operating the Oculus Rift VR headset via HDMI 1.3 input will require you to have an additional HDMI 1.3 output available (or a suitable adapter) should the primary HDMI output already be in use. The Oculus Rift cannot be connected to the HDMI port of an onboard graphics chipset, as found on the rear of the motherboard.

For full motion-tracking and positioning of the head, the Oculus Rift uses the Constellation Tracking System. This consists of a multitude of invisible infrared LEDs that are embedded into the headset, and an IR-LED sensor reminiscent of a floor-standing microphone on top of a bedside lamp. The sensor is connected to the PC with a four metre cable, enabling it to be used in multiple positions in the allocated space. The sensor is capable of locating the LEDs situated under the front cover of the headset, and these emit infrared light to enable the sensor to establish their exact position in space. This "constellation" of lights allows the sensor to register extremely precise movements and reproduce them in a virtually 1:1 manner. This sub-millimetre precision is accompanied by very low latencies, that is to say, delays that fall below the threshold of perception for most people. Tracking accuracy can be increased even further by installing additional sensors (not contained within the bundle).

Thanks to the Oculus Touch input devices the Oculus Rift VR headset is able to offer motion tracking not only for the head, but also for the hands. In doing this Oculus has enabled users to immerse their hands in VR as well as allow new kinds of interactions in virtual space. The ergonomically designed controllers, one for the right hand and one for the left, are encompassed by a circular sensor ring in which invisible IR diodes are embedded, similar to those found in the headset itself. Depending upon the game or application the controllers can function as brushes, tools, or virtual hands - thereby allowing intuitive and direct interaction within the VR space.

The button layout of the controller is similar to that of the Xbox One controller, the difference being in this case that it is split between two hands. Located on each controller is a trigger for the index or middle finger, a grip button (that you press when you make a fist), an analogue stick, two action buttons and a small menu button. Next to the analogue sticks situated on each controller you will find a capacitative thumb rest with a light, delicately rubberised surface. The thumb rests as well as the buttons are also capable of registering the touch of the user, even if the buttons themselves are not depressed. When combined with a degree of gesture recognition this allows the controllers to simulate a range of individual and independent finger movements. Last but not least the controllers come with force feedback motors for vibrations e.g. collisions between objects within the virtual world.

The constellation tracking system assists in the motion- and positional tracking of the hands. For optimal tracking a second IR LED sensor is necessary, and this is bundled with the Touch controllers. The sensor, reminiscent of a small microphone stood on the base of a bedside lamp, is identical to the one initially provided with the Oculus Rift VR headset and comes with a 2,5 metre long USB 3.0 cable. Oculus VR recommends that this second sensor is placed at a distance of around 2 metres from the first sensor to prevent the controllers' infrared diodes from losing tracking during complex movements.

Placing the sensors together allows them to locate the sensitive LEDs embedded in the controllers' sensor rings, and these infrared-emitting LEDs allow the sensors to produce an unparalleled level of positional tracking accuracy. With this Constellation system available the sensors can register and reproduce extremely accurate, virtually 1:1 movements in a 180 degree (front facing) setup. The sub-millimetre precision and very low latencies means that any delays fall well below the threshold of perception of most people. Full room-scale VR with 360 degree tracking is available to the Rift with a third, optional, IR LED sensor. 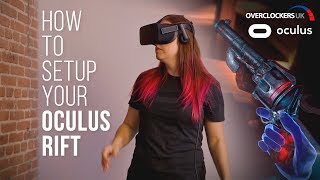 This thing is both stunning and awesome but at the same time hard to explain to someone. You can use 200 sentences and it still wont click until you try VR for yourself.

I would dare say this is as much of a game changer as the introduction of 3D graphics in games was in 90s.

This thing puts you right inside the world of the game and grabs your full attention. The most immersive experience I ever had gaming.

This thing at 400 quid price mark is an absolute bargain, you get the headset, 2 advanced controllers and you also get 6 free games, 2 of which are some of the best VR games made to date. There is a ton of great free VR experiences out there and the good paid ones are AAA quality level.

Before I got one I was a bit afraid I might get bored after a while and regret this purchase...

But here we are 3 months later. My VR games library is 46 titles strong, I've been to the moon, I've been throwing disks in zero gravity, I was a gladiator, I high fived shrek in a VR social game. I have not played any flat monitor games at all since I got my Rift and I play at least 3 hours on an average day, much more on days off. If it broke now I would have got a new one tomorrow.

If you are on a fence, buy it, you won't regret it.

Received the bundle on perfect conditions. Its all working as intended, and i really don´t have any negatives on the purchase from Overclockers UK