If you’ve read our helpful Guide on why and when to upgrade, tried to squeeze the most out of your existing hardware and still aren’t happy with how your PC performs it’s time to decide what part to replace. There are plenty of diagnostic programs available to help you determine what component is holding your performance back. Some examples worth trying are User benchmark, HWiNFO, System explorer, Crystaldisk Info, CPU-Z and even the inbuilt Windows performance monitor. For gaming, it’s likely to be your GPU but bottlenecks can come in many forms and an upgrade is the best way to make your existing PC faster and improve FPS.

A storage drive that is overfilled is guaranteed to slow down your PC and even cause it to crash. There’s no hard and fast rule as to how many Gigabytes you should leave free but SSDs are the most negatively affected so it’s best to try to keep them under 75% full. If you’re running out of space and have already cleaned out any unwanted programs it’s time to upgrade or invest in another drive.

Hardrives function using moving mechanical parts which makes them slower but the benefit is cheaper pricing for larger amounts of storage space. They are great for storing large files that you don’t access often. Your OS or any frequently used apps and games should be installed on an SSD for the best performance. Hard drives vary in size and speed and in general 3.5” drives are faster and have a higher capacity whereas 2.5” drives usually require less power and are a little slower. There is also the option of a faster 7200rpm or energy-efficient 5400rpm drive. If you’re looking for an affordable upgrade to your gaming desktop we recommend this 2TB Seagate Barracuda for only £56.99.

An SSD consists of no moving parts and instead, they store data on memory chips where fast-access times, boot times, and read and write operations happen at a faster rate, allowing for increased performance. The downside is that the price per gigabyte is higher when compared to an HDD, so for most people, they are best used in combination with a traditional drive. If you want to speed up an aging computer, upgrading to an SSD will have a huge impact on your overall performance and when it comes to gaming load times will be reduced and open-world games will display more smoothly. There are several different types to choose between depending on your budget and requirements.

A SATA SSD like the Samsung 860 Evo is fast with up to a 550MB/s Read/Write speed making it a great upgrade over a standard HDD. The 2.5” size means it can easily be installed in a standard storage bay and the SATA connection means there is less to worry about when it comes to compatibility. It comes with a 5-year warranty for peace of mind and the 1TB version can be bought for £139.99.

An M.2 NVMe drive bypasses the limitations of a SATA connection and plugs straight into a compatible motherboard. Using this connection can increase read and write speeds dramatically up to 3500MB/s. They can be slightly more expensive than SATA SSD but are much faster and take up less space in your case. Something like the Samsung 970 EVO plus is a great choice and a 1TB version can be bought for £209.99.

If you’ve recently bought a Ryzen processor and invested in the X570 platform then your motherboard will be compatible with new Gen4 SSDs which use Gen4 PCIe technology for incredibly fast read and write speeds. These drives are the fastest but also more expensive. The Corsair MP600 has a read speed of 4650MB/s and the 1TB version is available for £278.99.

The most important part of a gaming PC is the graphics card and if you’re experiencing poor FPS when gaming your GPU is likely the culprit. A new graphics card will make the biggest improvement to your gaming experience but before choosing your card make sure to check compatibility with your case, motherboard and power supply. For this, you need to take into account the size of the GPU, the required PCIe connections and the wattage needed. Generally, the more that you spend on a GPU the more powerful it will be. The Graphics card market is highly populated with a card at every price point so aim to get the best GPU within your budget. Once you’ve chosen the model it’s time to take into account aftermarket cards. Different manufacturers will ship the cards with varying clock speeds, cooler design, and aesthetics.

If your budget is around £300 for a graphics card check out the RX 5700. AMD’s latest graphics cards are powered by the all new RDNA architecture and are designed from the ground up for exceptional 1440p performance and excellent power-efficiency for high-fidelity gaming. The power colour card comes with a boost clock speed of 1765MHz and a £319.99 price tag.

If you have £600 to spend on your graphics upgrade take a look at the Gigabyte Gaming OC RTX 2070 Super. Excellent cooling, a high boost clock speed, Ray Tracing, and Fusion RGB lighting make this GPU a great choice. It’s currently on offer for £529.99 with a normal retail price of £599.99.

For a sizable budget of £700 plus the MSI Super Ventus XS OC RTX 2080 Super will give you plenty of gaming power. The RTX super series has more cores and higher clocks, making them up to 25% faster than the original RTX 20 Series and 6x faster than the previous 10 Series GPUs. The Super Ventus features excellent cooling and comes with a 3-year warranty for £749.99.

If the GPU is the most important component in a Gaming PC the CPU is a close second. Choosing the right CPU for your gaming system is important as it can make a big difference in some games and a poor CPU can bottleneck a top-end graphics card. There are lots of factors to consider when upgrading and it’s likely you will also have to change your motherboard because CPUs require a specific socket and each socket tends to only support a specific generation of processor.

If you’re using an older PC and want a big performance boost you will likely need a CPU, motherboard and maybe your RAM as well. It might also be worth upgrading your cooler at the same time. When choosing your CPU there are two big players AMD and Intel. As a general rule, Intel processors are better for top tier gaming because they have a higher single-core speed. Intel processors also overclock a lot better. AMD Ryzen processors are perfect for a system that is also used for video editing, 3D rendering or streaming thanks to excellent multi-core performance. If you already have a First Gen Ryzen, there is also likely no need for a new motherboard, as the Ryzen chipsets all share the AM4 socket.

If you want the best CPU for gaming and have a sizable budget then it doesn’t get any better than the Intel i9-9900K. With a max turbo clock speed of 4.7Ghz on all 8 cores, 16 threads it’s blisteringly fast. However, with a price tag of nearly £500, you might be better off with the Intel i7-9700K which delivers near identical gaming performance for £360 despite having no hyperthreading and a slightly lower boost clock speed.

The best value for money CPUs come from AMD and their 3rd gen Ryzen processors. Out of the box, the Ryzen 5 3600X is the best processor in its price range for gaming and productivity. With 6 cores and 12 threads, an all-core speed of 3.8Ghz and included cooler for £240 it’s incredible value. For £300 you can get the wonderful Ryzen 7 3700X, which comes with 8 cores, 16 threads and 4.4Ghz maximum boost clock which makes it great for gaming and beyond.

At the budget end of the scale look no further than the Ryzen 3 3200G with a price tag of only £98.99. This APU comes with integrated RX Vega 8 graphics which means it’s possible to play some games (like CS:GO) without the need for a dedicated graphics card. It even comes with a Wraith cooler.

If you want to play any recently released titles you should be aiming for at least 16GB of RAM. Previously 8GB would have been adequate but newer demanding games require more memory in order to run smoothly. You could also consider future-proofing your PC with 32GB but this isn’t required for gaming right now and is more suitable for PCs that are also used for tasks such as video editing.

When it comes to upgrading memory there are two options. If you have available DIMM slots on your motherboard you can purchase additional sticks to fill the empty slots. If you’ve run out of space or want to upgrade you can start again from scratch with brand new RAM modules.

Before purchasing memory you need to check what your motherboard and CPU can support which means checking the DDR generation and speeds. If you are doubling up on what you already own you need to try and purchase the exact same again as although other memory will technically work you could run into complicated compatibility issues.

If you are purchasing new memory there are plenty of different options and it’s easy to get caught up with speed and timings. When it comes to gaming capacity is the most important. Focus on that 16GB sweet spot and then get the fastest memory within your budget. Remember you will see the biggest improvement by upgrading your CPU or GPU.

If you are looking to get the best memory for gaming Overclockers recommend checking out the Team Group 8Pack Edition 3600MHz DDR4. A speed of 3600Mhz is the sweet spot for gaming on both Intel and Ryzen processors and the premium Samsung B-die ensures maximum compatibility and stability. The aggressive CAS latencies of 16-16-16-36, as well as their high overclocking potential, make the 16GB kit worth the £149.99.

When it comes to gaming a display can make or break the experience. It’s not technically part of your PC but it takes a decent gaming monitor to effectively showcase your graphical prowess. There are many options to consider when it comes to upgrading your monitor but for gaming, the main priorities are fast refresh rate and low response time. Other factors to consider are resolution, size, panel type, and Gsync or Freesync capabilities.

A high end gaming PC needs a high end Monitor and it doesn’t get much better than the LG 34GK950F. The 3440×1440 resolution is the perfect sweet spot for immersive widescreen gaming. The 144hz refresh rate and 1ms response time ensures smooth gameplay while the nano IPS panel means colours are bright and accurate. For just under £1000 it also comes with Freesync technology to prevent screen tearing.

A more affordable option is the LG 24GL650 which comes with a price tag of just under £200. The 1080p resolution is perfect for less powerful gaming PC’s and the 144hz refresh rate provides a significant upgrade over a 60hz display. Freesync technology and a 1ms response time ensure your visuals are blur and tear free. Its base can be adjusted to change the tilt, height, and pivot of the monitor to make playing more comfortable. 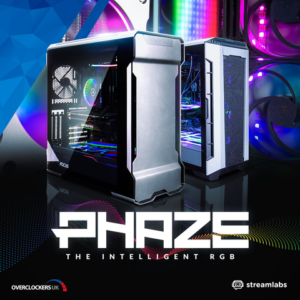 Introducing the only RGB lighting you’ll ever need: Phaze 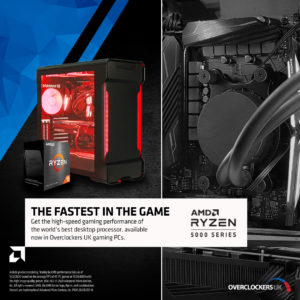 Get ready for Ampere with Overclockers UK: Prebuilt gaming PC