Practical tool from "der8auer" for the easy removal ("delidding") of the Integrated Heat Spreader (IHS), compatible with Intel Ivy Bridge / Haswell / Devil's Canyon / Broadwell / Skylake / Kaby Lake / Coffee Lake and Comet Lake-S CPUs, Version 2 is made from anodised black aluminium, overclock comfortably and safely like a professional! Anyone who was building their gaming PC in the early 2000s can probably still recall the numerous instances of broken CPUs, as occurred with the AMD Athlon XP whose silicon core broke at the corners when mounting a CPU cooler. In order to avoid the high RMA rate of otherwise perfectly functioning processors, especially when placed in the hands of less experienced users, proceeding generations of processors - beginning with the AMD Athlon 64 and Intel Pentium III - simplified the process of mounting the CPU cooler by installing a metal heat spreader on the CPU package, thereby successfully protecting the CPU die from damage.

This mostly nickel-plated copper Integrated Heat Spreader (IHS) guides the heat produced by the chip into the CPU cooler and distributes the thermal energy over a larger surface area more effectively than raw silicon alone. In order to effectively integrate both components a Thermal Interface Material (TIM) is located between the heat spreader and the silicon chip, which itself has not consisted of solder since 2012. Instead of solder a standard thermal paste is used, and this has also gone on to take the place of solder in all proceeding series of CPU. However due to its relatively low thermal conductivity it has drastically reduced the potential for extreme overclocking.

The proportions of the CPU cooler in this instance are almost irrelevant, since the heat build-up occurs inside of the processor package. To enable effective cooling of this kind of CPU even while functioning under extreme overclocks, daring enthusiasts and extreme overclockers separate the heat spreader with a sharp razor blade or similar tools. This demands the greatest of care and a supreme confidence in your ability to avoid damaging vital components. This radical method holds a not inconsiderable degree of risk for even professional overclockers with a superabundance of experience to call upon.

Overclock to the Limit Safely & Easily like an Overclocking Champion!

The benchmark-grandmaster Roman "der8auer" Hartung developed, and in version two improved upon, the Delid Die Mate 2 solution. This solution allows anybody to easily, comfortably and safely remove the heat spreader without risking a premature end to a pricey purchase. Known as a CPU delidding tool and manufactured from black anodised aluminium with a laser-engraved der8auer logo, it allows the heat spreader to be removed risk-free in under a minute. The processor is placed into the Delid Die Mate 2 receptacle according to the arrow marking on the CPU, and a slider responsible for cutting the CPU is inserted and then slowly and evenly tightened by means of an Allen key which completely removes the heat spreader which is then separated from the processor. This method allows the removal process to be performed absolutely reliably and without risk of damage.

This previously dangerous act of DIY is turned into something routine and harmless, thereby guaranteeing that the CPU and the now accessible CPU components survive unscathed. This opens up completely new possibilities in the realm of CPU modding to extreme overclockers and their aspirational counterparts everywhere. The issue of additional heat transfer between heat spreader and silicon has now disappeared and the CPU's temperature falls precipitously as a consequence - even without any overclocking. An additional advantage is that a more premium thermal paste with improved conductivity can and should be chosen, for example the offering from Thermal Grizzly . The results speak for themselves: Temperature reductions of 10 °C to 20 °C are achievable.

A popular alternative for some processor generations lies in the choice of Thermal Interface Material e.g. replacing it with a liquid metal thermal paste offering notably improved conductivity. This subsequently allows the heat spreader and a full cooler to be reattached as normal by means of silicon adhesive. To maintain reliable contact between the heat spreader and the CPU, the third component of the Delid Die Mate 2 is required, this is inserted over the receiving module and enacts a vice-like pressure from above. It should be ensured, however, that the amount of pressure applied is not excessive in order to prevent damage to the CPU.

Roman "der8auer" Hartung (pronounced: "der Bauer") is a young mechatronics student, hardware enthusiast and professional overclocker from Germany. In spite of his relatively young age he has been active in the overclocking scene for may years and has already set numerous world records. Always interested in squeezing the last drops of performance out of any piece of high-end hardware he can get his hands on, the OC grandmaster (as of August 2015) sits at second place in the professional "Elite" rankings of the best overclockers in the world (see HWBot.org)! At Caseking der8auer offers a range of exclusive OC products to allow hobbyists to get a taste of the breathtaking performance just waiting to be unlocked, as well as massively overclocked Extreme Gaming Systems for enthusiasts and overclocking bundles or even custom LN2/DICE containers for liquid nitrogen or dry ice cooling.

*** Important Warning! ***
The removal of the CPU heat spreader is performed at your own risk and always results in the complete invalidation of the manufacturer's guarantee and warranty

Compatibility Information: Without the integrated heat spreader the mounting height of the CPU cooler decreases slightly and, because of this, coolers with fixed mounting heights can no longer be mounted. For this reason please be sure to check prior to installation whether the selected cooler can also be set to a lower mounting height. If you should require assistance, you can contact Roman "der8auer" Hartung personally
Technical Details: 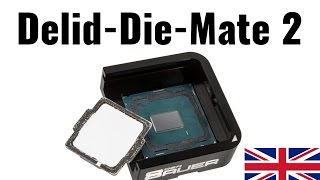 (from 10 customer reviews)
Write a review

Couldn't make it any easier!

Used this to delid my 8700K, before delidding my load temps used to be up in the 70s. Once delidded I used liquid metal to cool the chip and BOOM! 20c cooler!. Delid- die-mate 2 definitely helped with easily being able to remove the IHS without damaging the CPU.

The product felt very premium, all the parts felt secure and they fit together well.

An absolutely wonderful piece of kit, used it to delid my 4790k which was running too hot, as a first time delidder I managed to do the whole thing in about 10 minutes and 30 mins of waiting for the silicone adhesive to dry.

I have got a 20 degrees Celsius drop in my temps by using this with thermal grizzly conductonaut so it's a massive yes from me.

Build quality is also pretty great and sturdy so no complaints anywhere :)

Delided my 6600K in less than a minute. Super easy and effective.

Done no damage at all. Reliding was easy too as came with a template to slot the ihs into for perfect realignment.

Bit pricey for a 1 time use though. Now selling mine as i now have no need for it. On ebay if interested.

Basically does what it says on the tin....+ Very Well too !!!
I am using a custom loop, so this can explain some of the good results...
For reference my friend bought one too and runs one of those - "AIO Cpu Block/Radiator Combo" - He is getting great results... I would guess on air the result may differ slightly...

Of all the stress tests I have done, I never saw over 60oC

I hope this helps

i7 7700k delidding with this tool is a doddle.
PC is watercooled with custom loop. Chip is OC to 4800 MHz. Using Intel Burn & CPUID HWMonitor
temps are

I've played around delidding old CPUs before with a razor and it always takes ages. There's always a big risk of cutting off a resistor, damaging the die or slicing your finger open.

With the Delid-Die-Mate 2 it removes most of that risk and the process takes a matter of seconds. It took me under 30s to delid my i7-4770K and felt much safer for the CPU.

I was able to replace the terrible stock TIM with some liquid ultra and use the included IHS re-positioning tool and clamp to reattach the IHS in the correct position with some silicone adhesive.

I never would have felt comfortable taking a razor or block of wood/hammer to my i7 but this gave me the confidence to give it a go. And I'm glad I did, it's reduced my idle temps by 2C and my load temps by a whopping 14C!

Conductonaut is recommended for experienced users who are looking for a top performance product with best heat dissipation where...
Thermal Grizzly Liquid Metal Applicator - 3 Pieces
(0)

The Liquid Ultra is made of 100% metal, but it has an absolute new usability and offers an outstanding performance.
Recently Viewed
Stock level indicator
Close